Mladen Stilinović (1947-2016) was a Croatian artist who spent his artistic career based in Zagreb. He was a member of what is now known as the 'New Art Practice' in Croatia, and a founding member of the Group of Six Artists (1975-79). What distinguished the productions of these artists living under Yugoslav socialism was a new approach to artistic activity, use of new media, and their engagement with the idea of art as as "an integral part of the criticism of the social praxis, in other words, a revolutionary mechanism for the introduction of qualitative changes in the social praxis".(1) Stilinović's early works reflect his engagement with a variety of experimental media including film-making, language works and artists' books, all of them grounded in his interest in language. Addressing the areas that interested him in this early period he stated "My first impulses were poetry and everyday speech — ways in which politics contaminated language and the means to avoid it".(2)
Notes
(1) Rasa Todoskijevic in Marijan Susovki's The New Art Practice in Yugoslavia 1966-1978, Gallery of Contemporary Art, Zagreb, 1978, p. 3.
(2) Branks Stipancic, 'Living Means Never Having to Attend Court,' interview with Mladen Stilinovic, unknown source.
_________________________________________________________________________
Frizerie/Hairdressers, 1975, 2010, Museum of Modern Art Warsaw, printed in Zagreb, ed, 200.

This accordion reflects Stilinović's interest in what was happening in the everyday life of the street and in the images and language people were putting up in the streets. In an undated interview with Sabina Sabolović, Stilinović speaks about this accordion, "I always look around on the street....Hairdressers for example, particularly kept up with the signs for hairdressing places since 1939 (I found out about this year later) up to 1977 when I did this little book. So through these hairdresser's signs, history could really be seen...I looked at adverts for restaurants with lambs on a spit, and compared them with car mechanics, who structured ads very differently...". 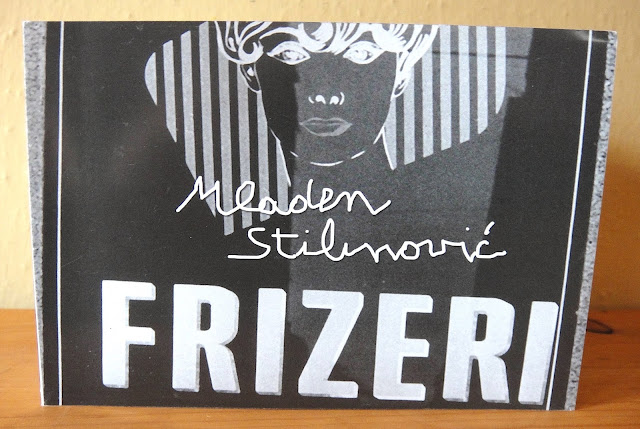 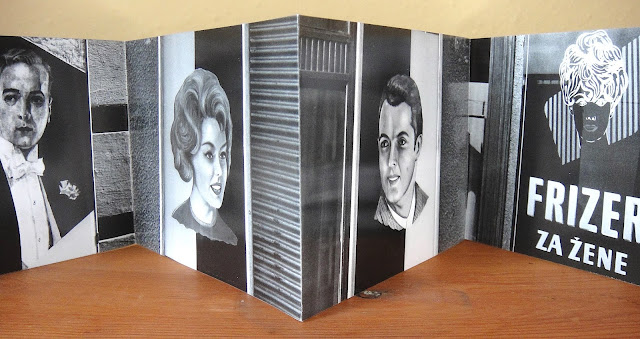 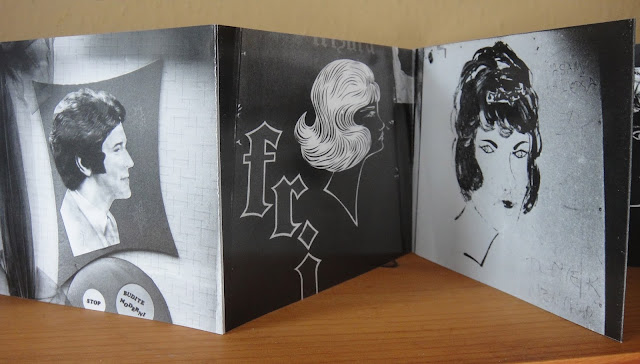 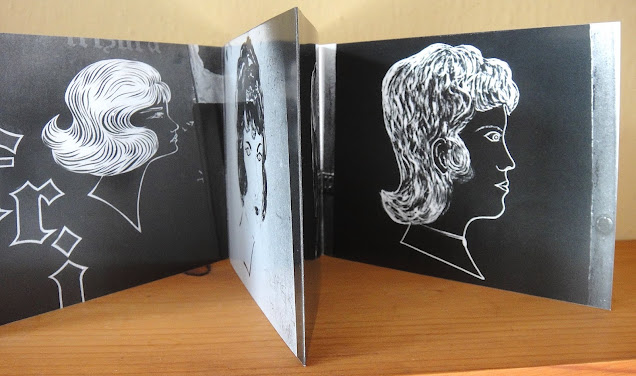 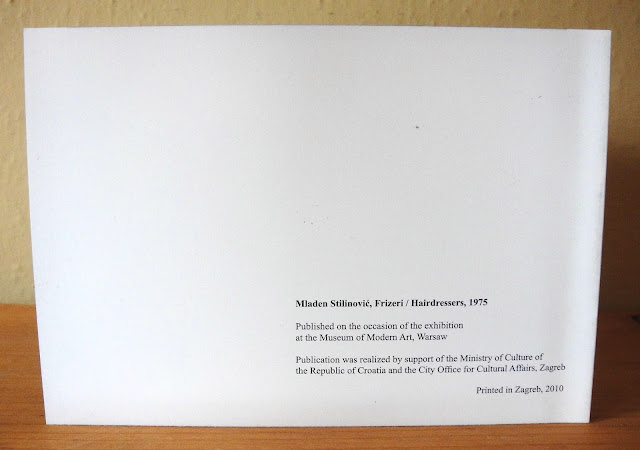 Mirroring his interest in film-making, the accordion format mimics film in its use of individual frames to construct something larger than each segment. Of this book, which was originally created using the most basic of media, pen and rubber stamps, Stilinović used a number of aphorisms that constitute Ludwig Wittgenstein's celebrated book Tractactus Logico-Philosphicus (1921). Stilinović's attraction to this book was no doubt Wittgenstein's own interest in language and his book's attempt to identify the relationship between language and reality, and his efforts to define the limits of science. It's interesting to note the contrast between the 'poor' materials Stilinović used in the construction of this book and the deep metaphysical nature of Wittgenstein's 'aphorisms' that constitute the heart of the book. 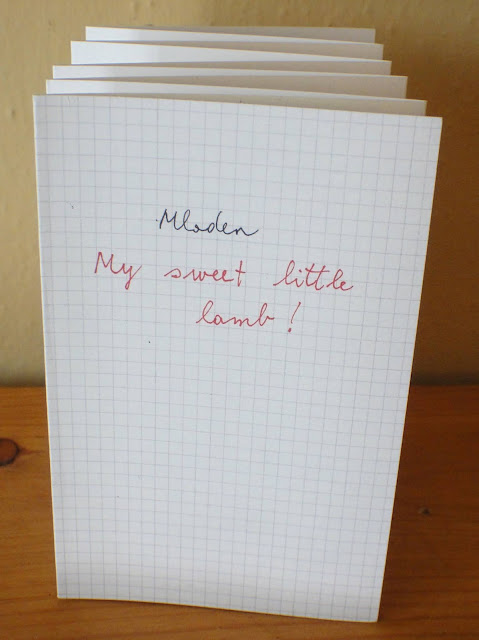 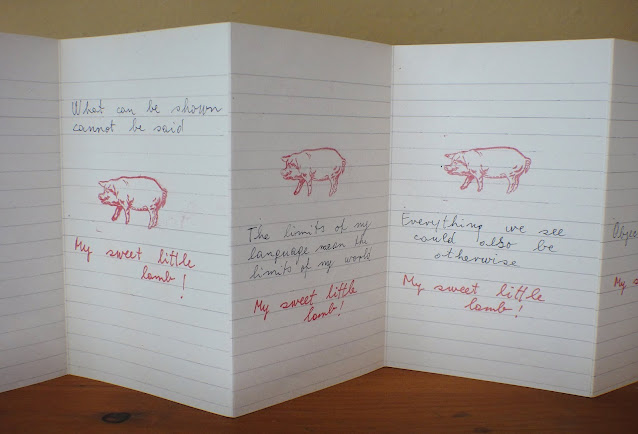 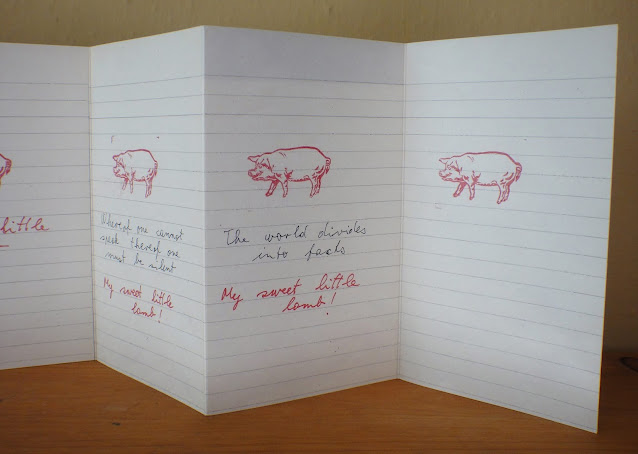 An interesting accordion that serves as a printed matter gallery for a mini-retrospective of Hinkley's works that he made between 2008-09, all of which feature his interventions into a variety of images taken from different sources. What I particularly like about this accordion is that Hinkley really uses the space of the accordion, and one consequence is that the 'empty' spaces become active elements in the piece, and in the viewer's 'reading' experience.
10 pages double-sided, 11.25" (h) x 6.25" (w), and when fully open 5 ft 2.5 inches. 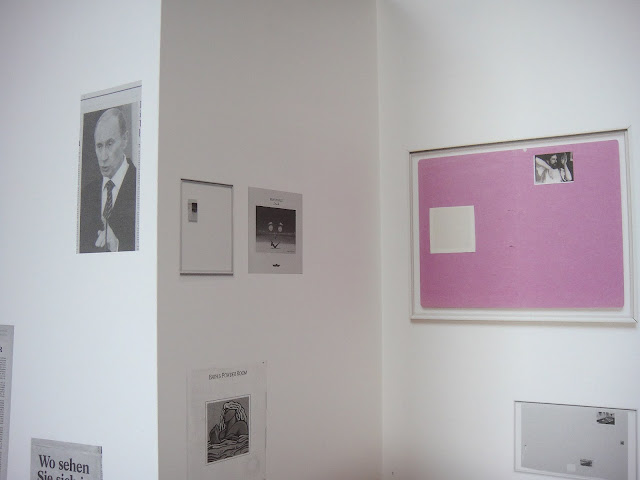 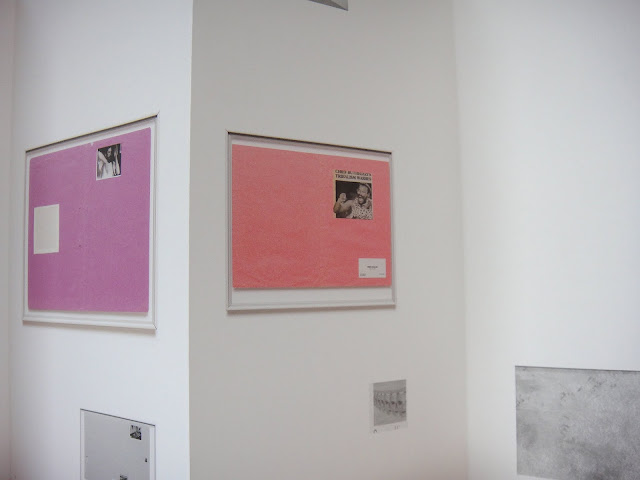 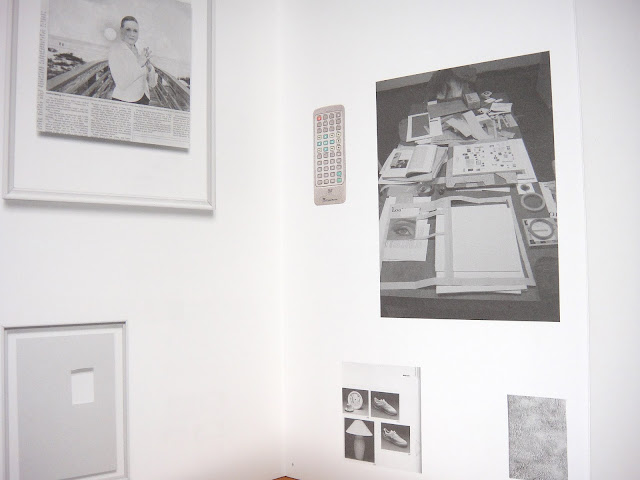 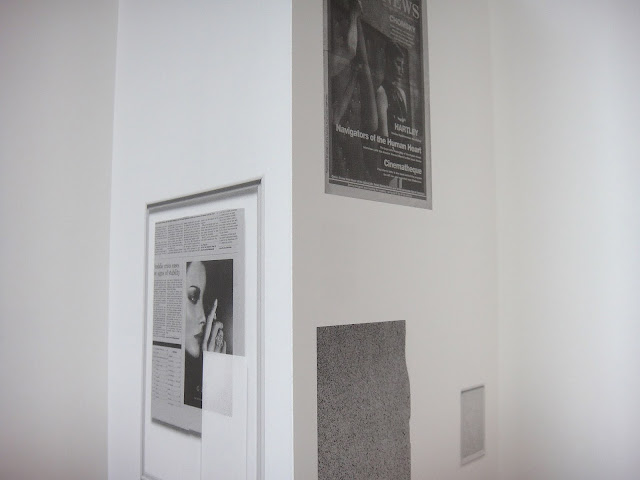 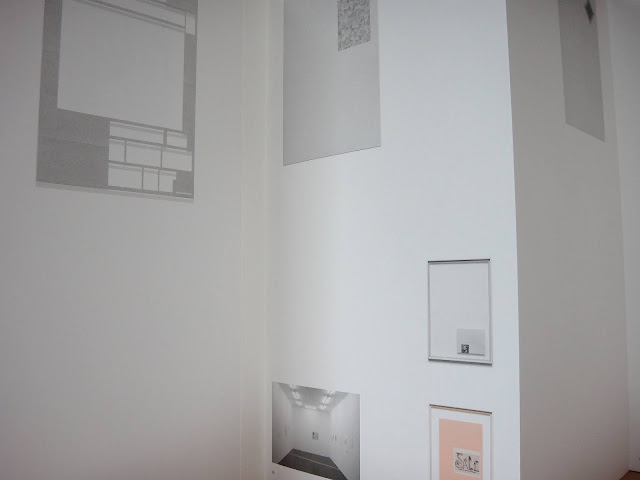 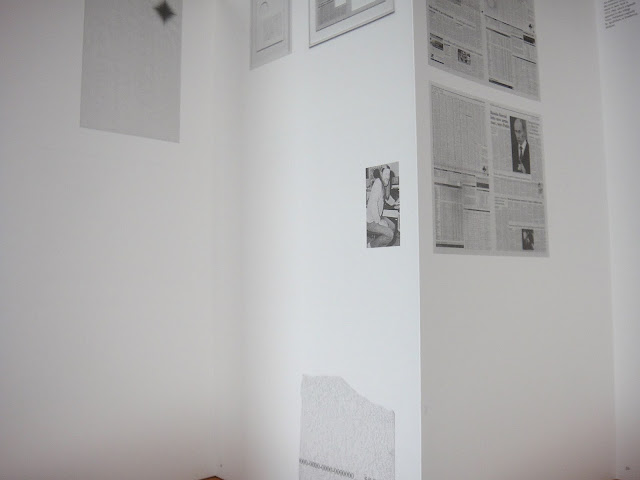 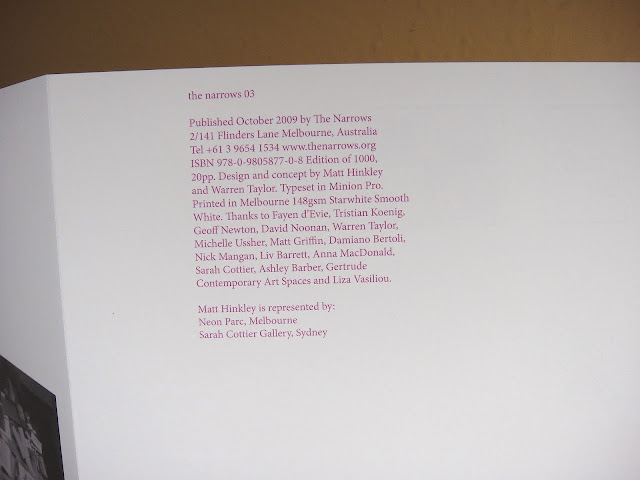 This sturdy and sizable accordion is a wonderful visual feast that documents a wide range of packaging images used by Indian firework manufacturers from the city of Sivakasi.

In an informative essay at the beginning of the book by Peter Nagy titled, A cartography of pictures, he states:

This book presents a simultaneity of histories. On the one hand we have a group of pictures culled from the immense stockpile created by artists in India over the past century, images which have served multiple uses and played contradictory roles, images whose semiotics are intertwined with the social and political histories of the Indian state. Complementary to this, we have a collection of packaging for a particular product and can discern the desires which have been projected onto that product.

Nagy goes on to write about fireworks' relationship to the Hindu festival Diwali (festival of lights) and how integral they have become to its celebration. In his conclusion he writes:

This collection of packaging images then, in the final analysis, describes the process taken from  colonial subject through independence and into globalisation. It celebrates the radical multiplicities of Hindu symbologies and their effects on secular subjects.

For those curious about the accordions' title, Nagy writes, "Surely innuendo was the goal for the artist who painted a none-too-subtle temptress holding a giant Roman candle and the copywriter who christened her "Cock Siren". All is explained! 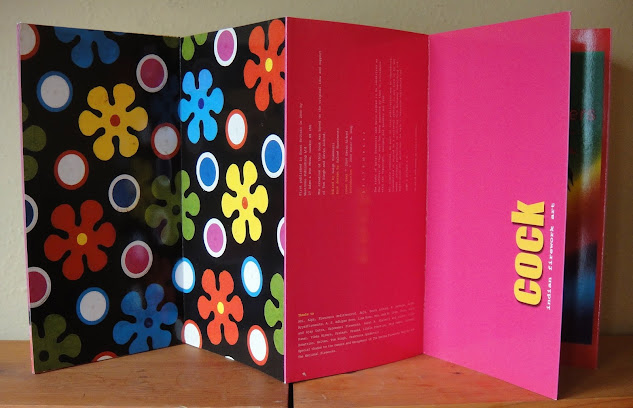 Posted by box of water at Wednesday, November 18, 2020 No comments:

I just had to feature this selection of 16 accordion publications published by Meier's Voix Editions. I have only recently come across this impressive and wide-ranging publishing house, and found these tucked away in their catalogue. I have previously posted about this work by Albert Merz in a separate entry in this blog.  Éditions Richard Meier

"On October 1st, 2017, the People's Republic of China commemorates its 68th anniversary with various celebrations. At the time, Antoni Muntadas was finishing his project Asian Protocols in China. On October 1st, 2017 he set out to identify and gather images and graphic items in which red, a symbolically loaded color in Chinese culture, affiliated with and used by the Government was predominant."  Antoni Muntadas
Four strips of 9 cards, individual cards 4" (h) x 5.75" (w), when opened each strip is 3ft long. 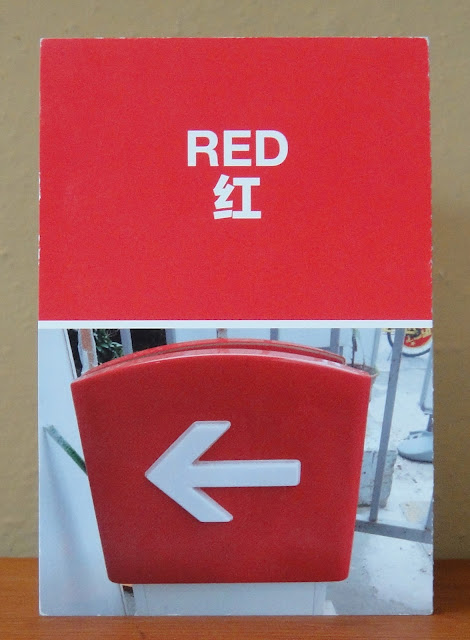 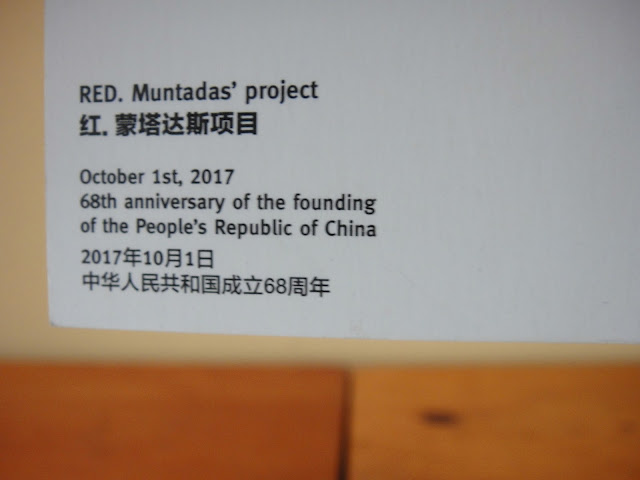 the text on the back of all the postcards 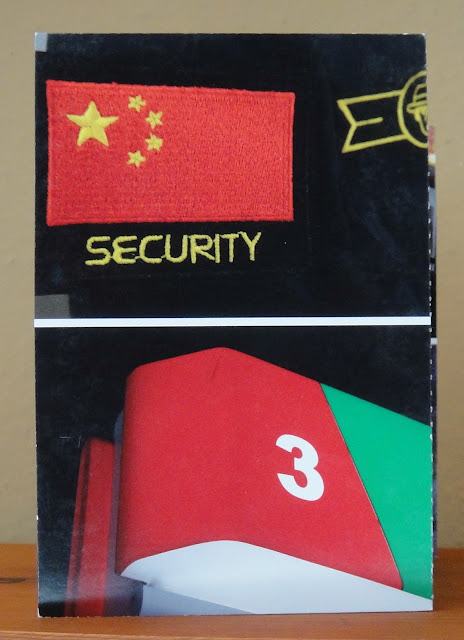 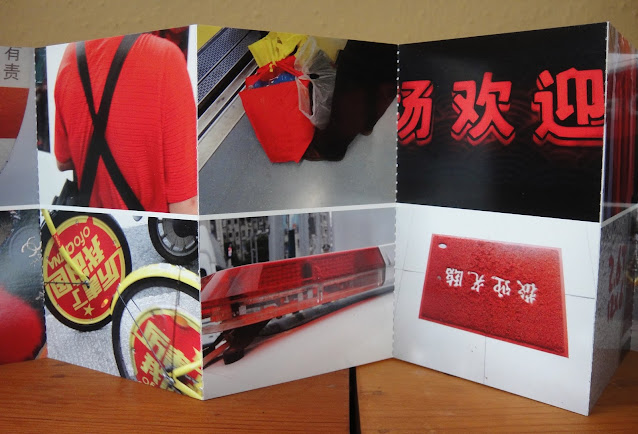 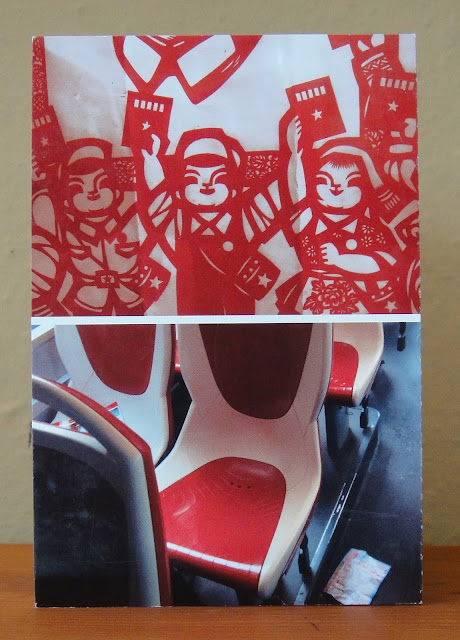 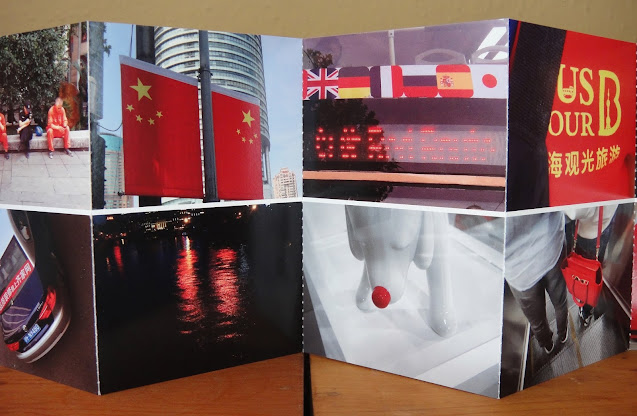 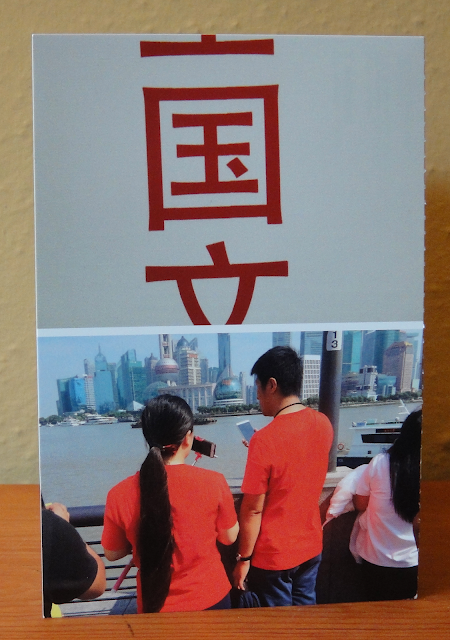 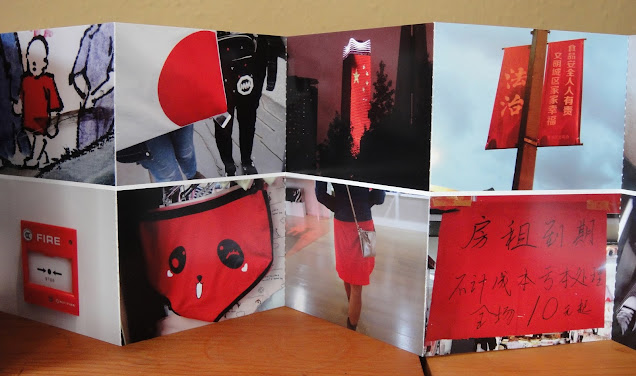