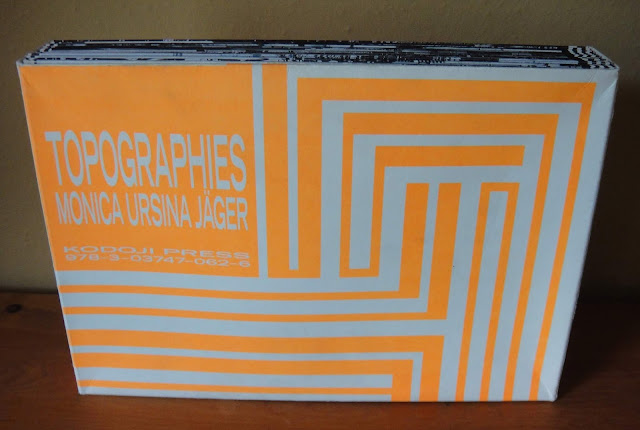 This is a remarkable publication, not only for its size but for the breadth of its undertaking. I'm going to let the very able description from Printed Matter, where I purchased it, serve as the explanation for this work.

"For several years Monica Ursina Jäger has been drawing built and natural landscapes inspired by Modernist-style architecture. Her precise works, using media including ink and pigment transfers, combine hope and downfall: on one hand designers’ aspirations, and fantasies, for the future; on the other the dystopia of failure. In creating these works Jäger has assembled a huge stock of images of buildings and environments, both her own photographs and images found in print and online, including rendered as well as completed constructions. Topographies, which is created in collaboration with Winfried Heininger, consists of one, extremely long, accordion-folded image created from hundreds of collaged images from this working archive.
Topographies reproduces the nearly 12 meter long collage one-to-one. The reader can turn the pages to follow the image, as if with a filmic tracking shot, or they can open the publication to its full extent and examine it in a less linear fashion. Whichever way they view it, the route is through man-made, forested and barren landscapes, some sites iconic, some prototypical, with an emphasis on the architectural ambitions of the 1960s. Our viewpoint moves from afar, to close up, the scenes largely in black and white with accents of color that emphasize the chill of the dystopian environments. With few signs of human life, Jäger captures the temporality of the most solid concrete and steel buildings. Like the fictional visions of Cormac McCarthy, this could be a past we have escaped or a future we would like to avoid.
Another landscape running along the back of the image that also frames the collage complements Jäger’s: a dazzle pattern. Dazzle is a form of camouflage used principally in World War I that works on the principle of applying a bold graphic pattern to an object so that discerning its contours becomes difficult, particularly when the object is in motion. The pattern used for Topographies was created by recording forms generated by applying such a pattern to a fictional, rendered landscape. The result is a structure that is impossible to read, which irritates the eye. Bleeding over onto the front of the image, it is one of several factors that destabilize the reading of the landscape. Jäger’s environment is a montage of proximities that become increasingly unlikely the more one observes, while the dazzle pattern echoes this narrative incongruity in visual form.
Monica Ursina Jäger (born 1974) is a Swiss artist, who gained her MA Fine Art at Goldsmiths College and lives and works in London and Zurich. She has participated in important group shows and exhibited widely throughout Europe and beyond. Recent exhibition venues include the Kunsthalle Düsseldorf, Kunstmuseum Thun, Essl Museum - Kunst der Gegenwart, Arroniz Arte Contemporaneo, Mexico and Galeria Pilar, Sao Paulo among others. Her work is part of many private and public collections. This is her first publication with Kodoji Press."
52 pages double-sided, 12"x8.5", and open at 36' 10". 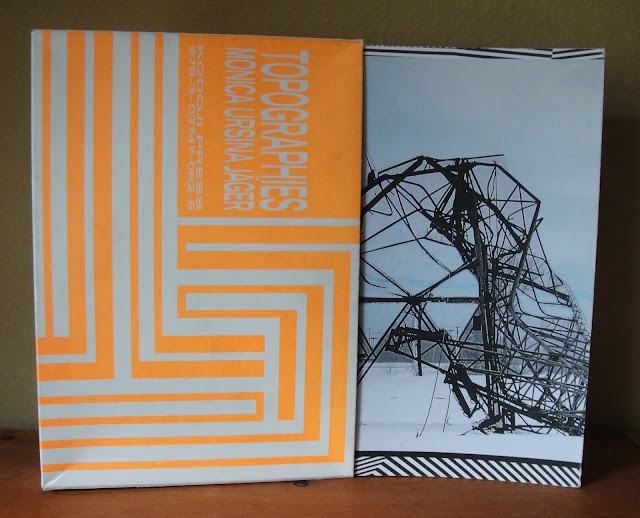 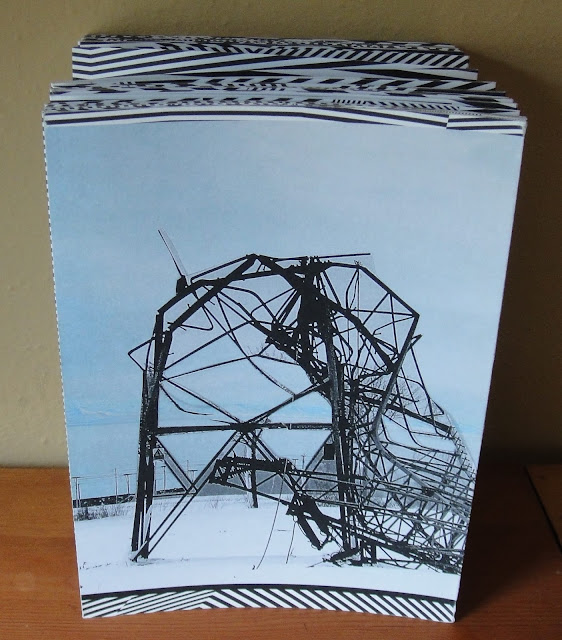 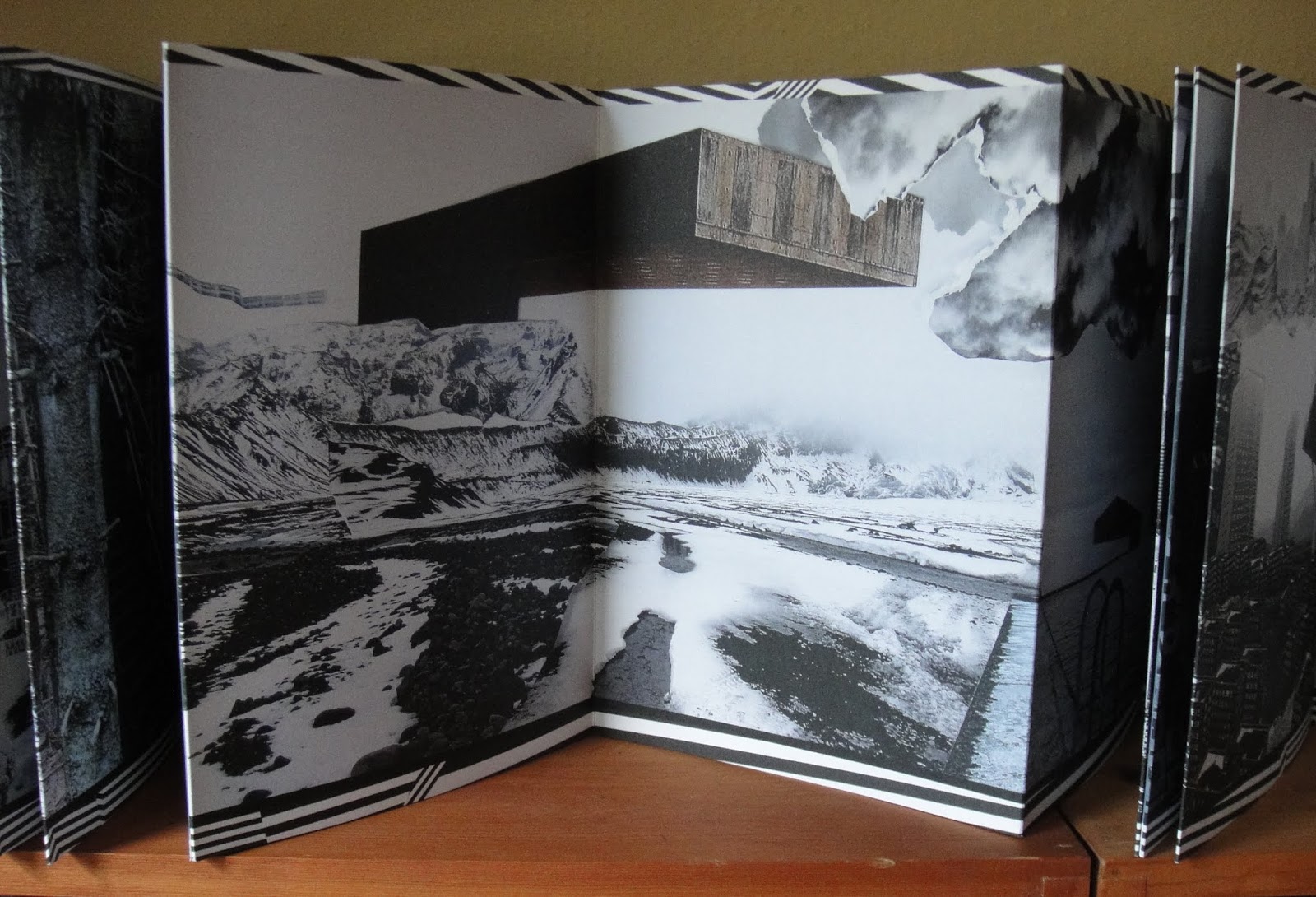 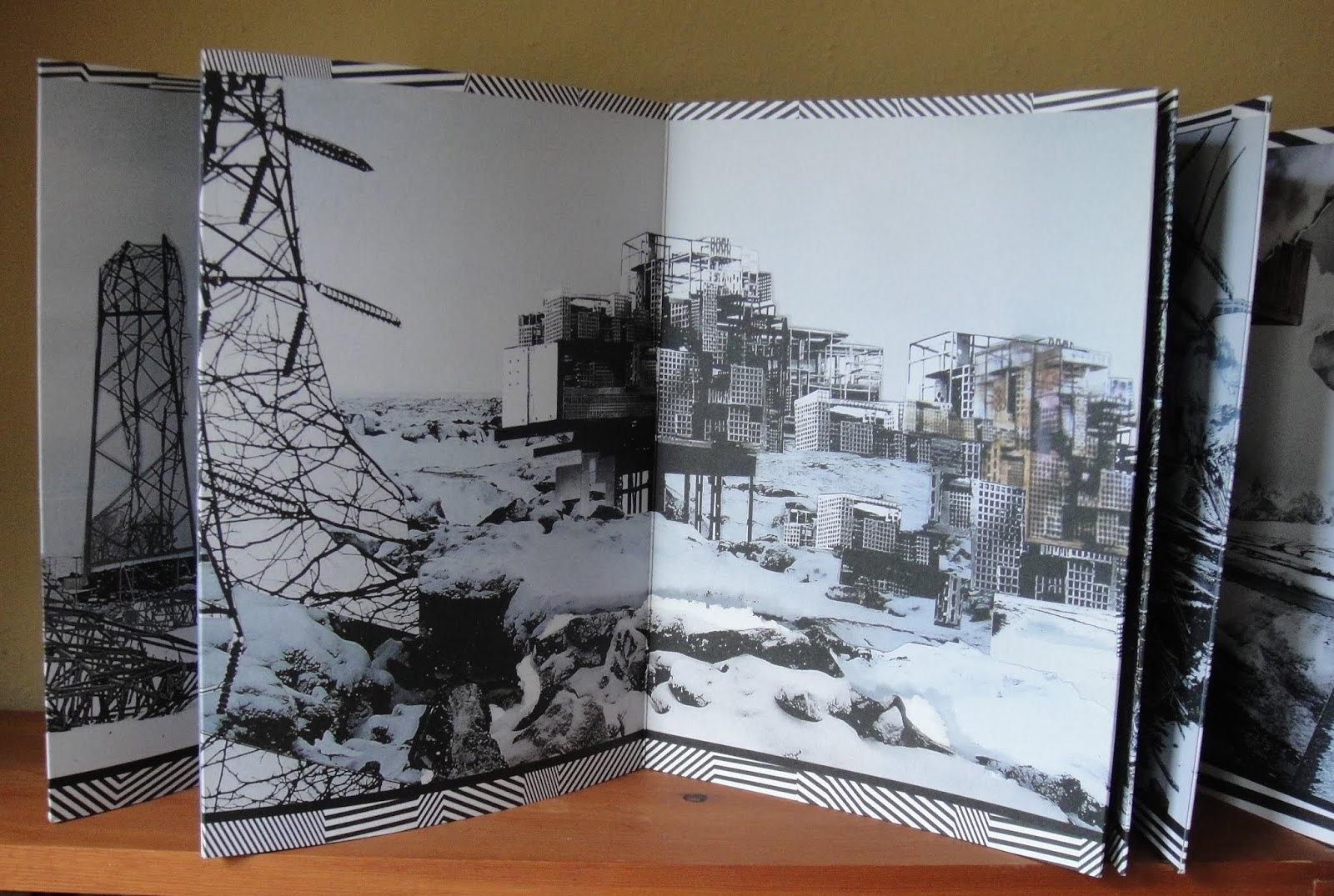 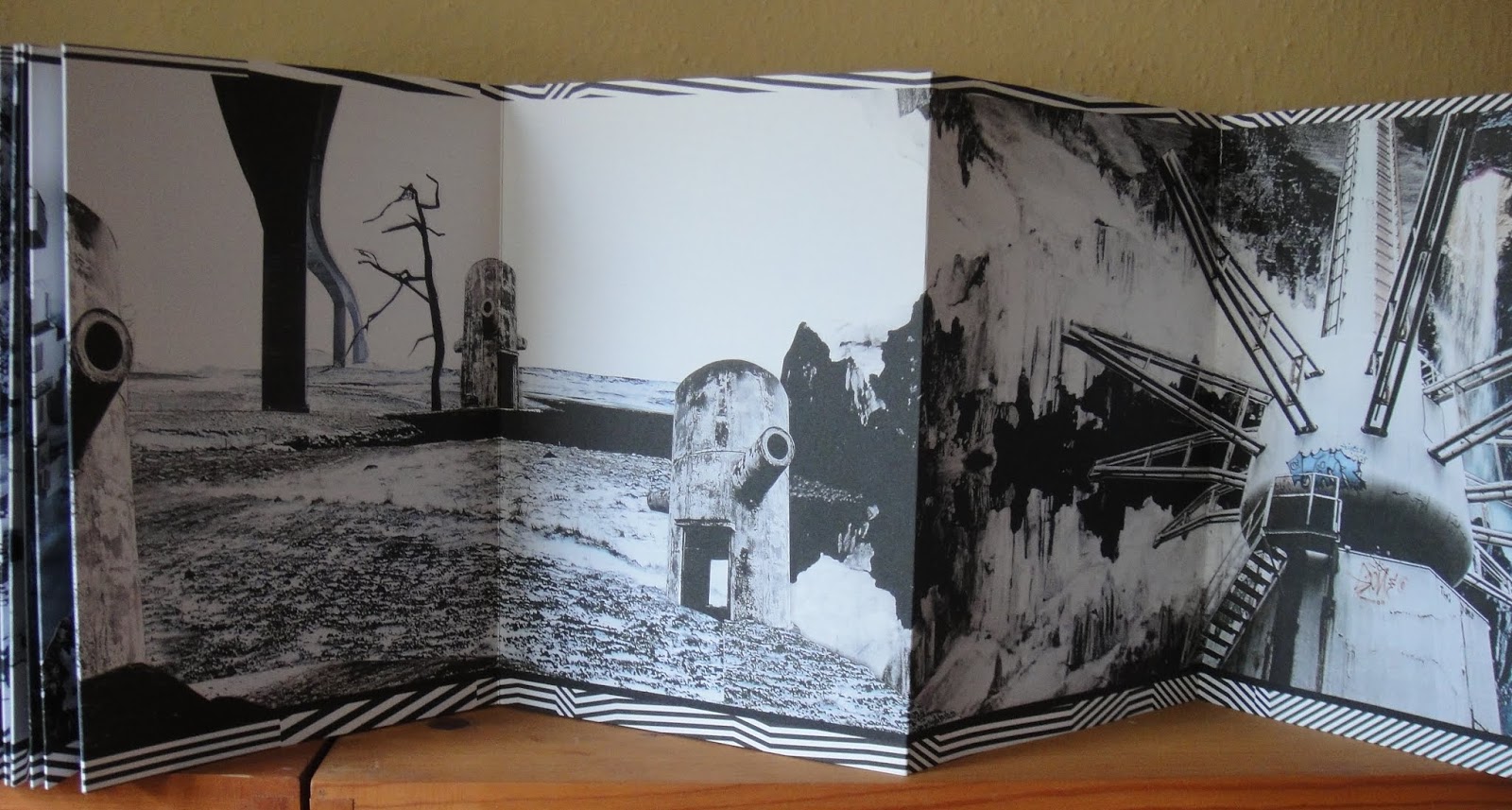 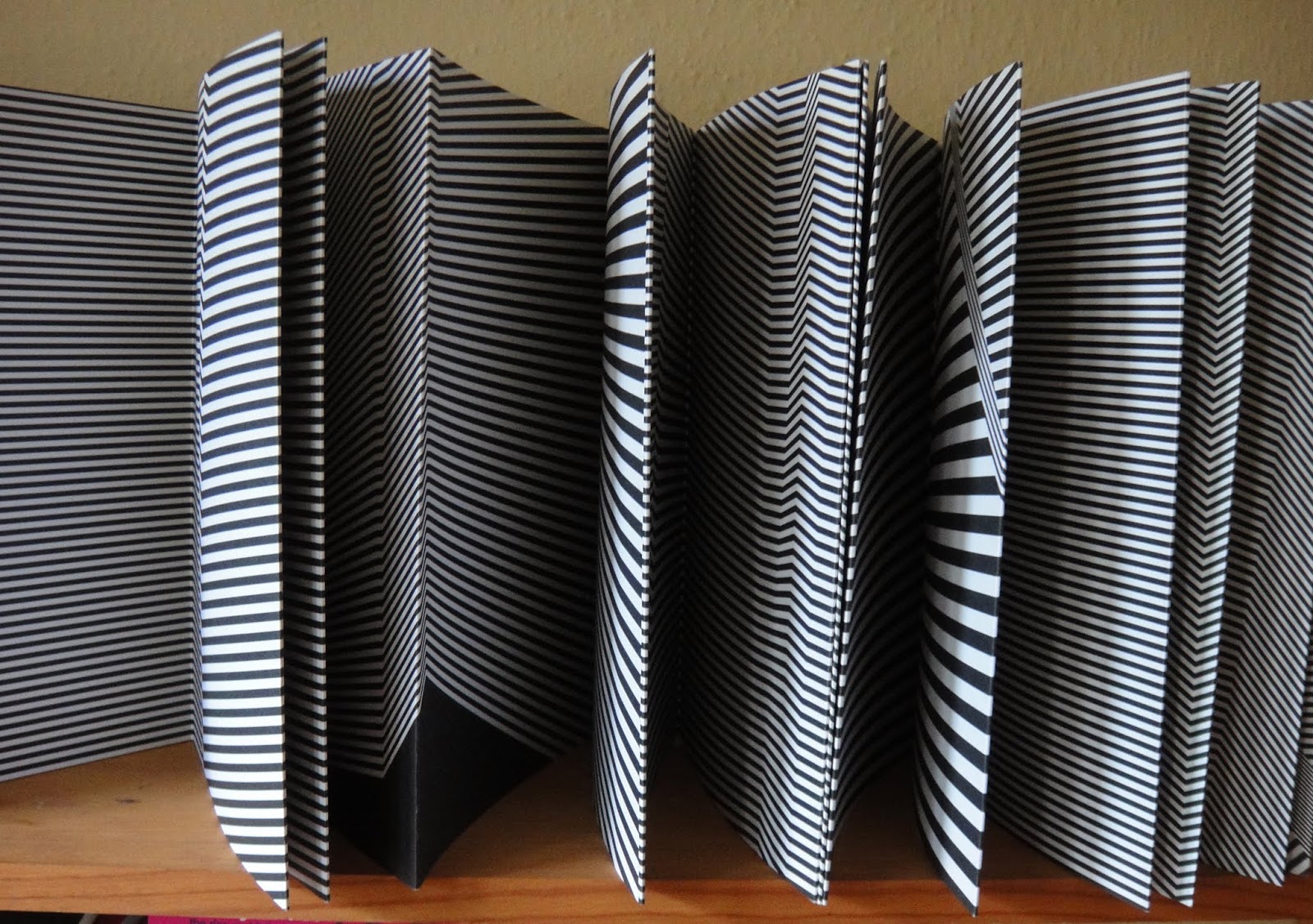 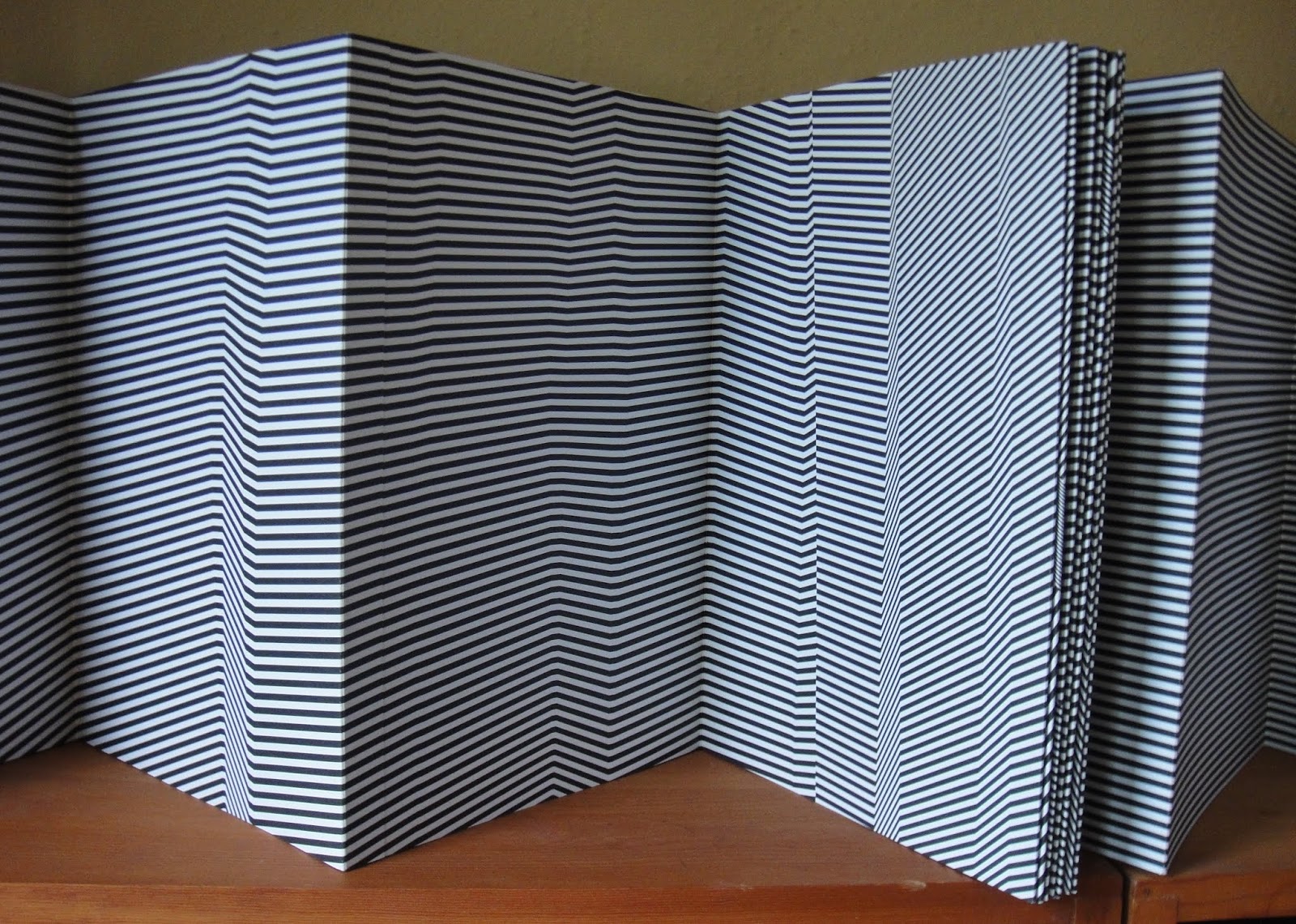 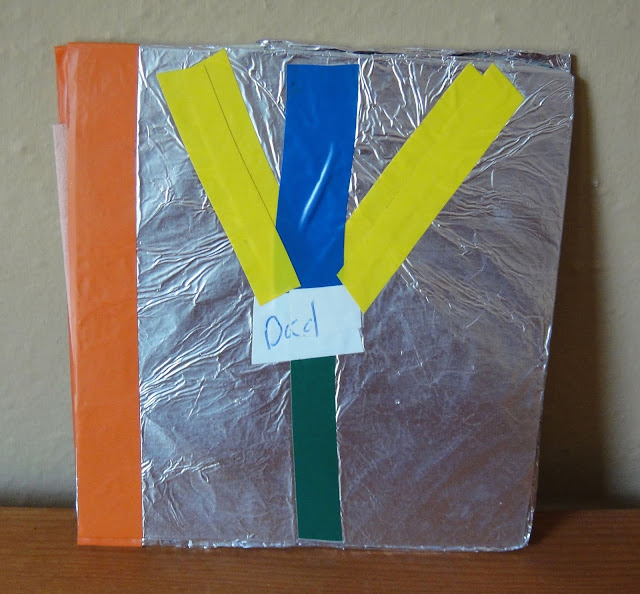 There's a first time for everybody and an accordion no less! 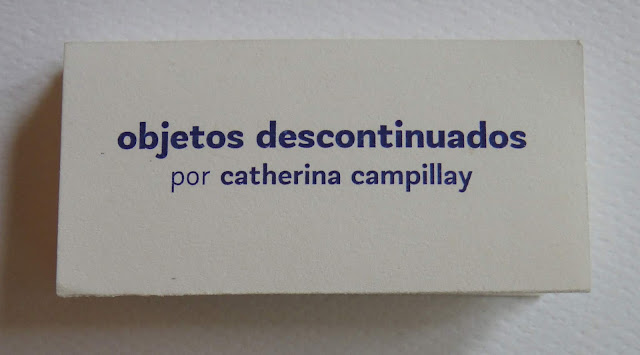 A fun little text-based accordion that taxes my Spanish translations skills with the tone of the book clear from the first discontinued object being "we run out of the clock batteries they no longer sell."

This book was published by Amistad "...which is a collaborative and feminist micropress from Chile, that wants to do great things with small formats. We publish zines about writing, photography, art and drawing, experimenting with different materials and production processes. We seek to generate friendly encounters to collaborate, experiment and discuss. Each publication is the result of affective interactions between authors and collaborators working within different disciplines." Find them here: https://cargocollective.com/
microeditorialamistad/TALLERES-FERIAS-Y-ENCUENTROS 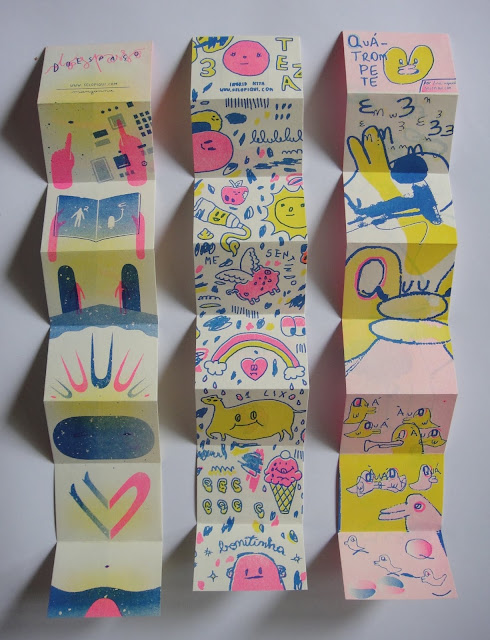 A really delightful series of double-sided mini-accordions from Piqui publishing, which was created in 2011 by Livia Viganó and Taís Koshino who now have a catalogue of over 20 publications. I have reviewed another of Piqui's mini-books on this blog, Taís Koshino's, Umbeagle (2013) and these three new double-sided accordions, each featuring a different artist, contain the same light touch coupled with a whimsical and playful approach to the accordion format. 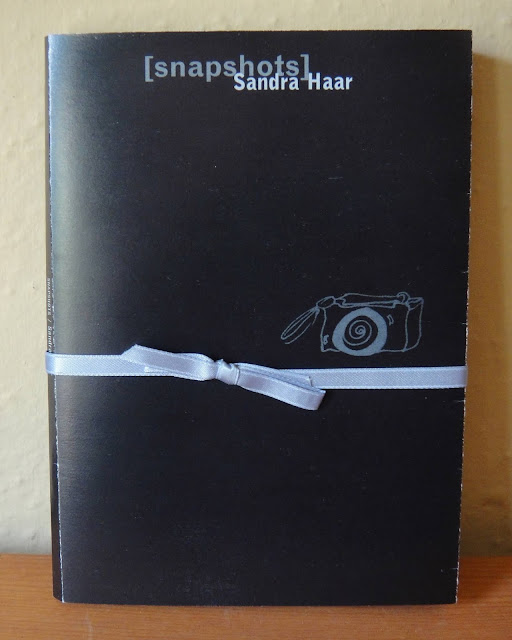 Sandra Haar has made issues of sexuality and representation a continuing theme in her works and career, and this book is no exception. There's a strange intimacy in reading and witnessing someone make themselves so vulnerable and in speaking so openly about such deep desires. I think this is a brave accordion book. 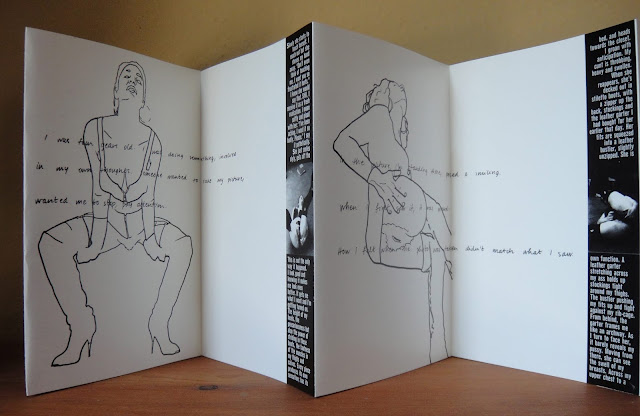 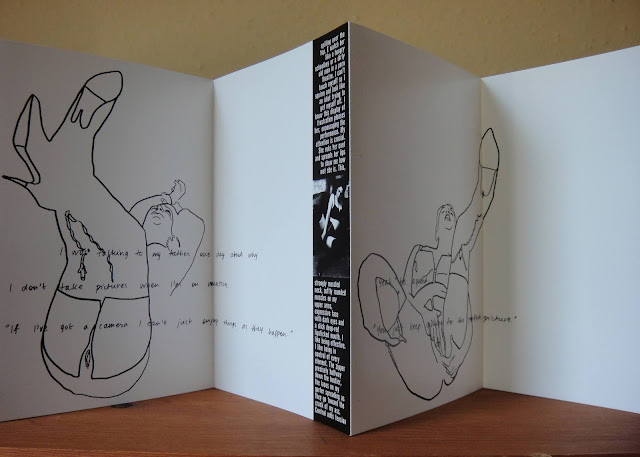 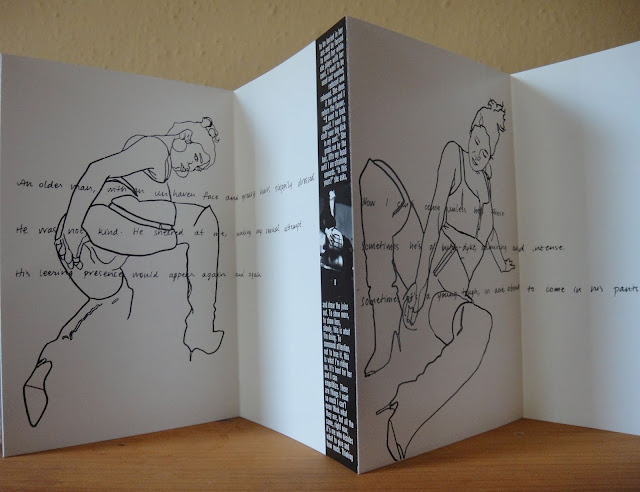 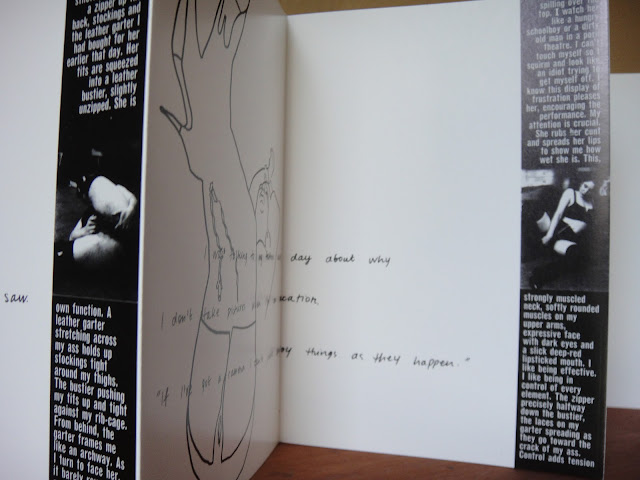 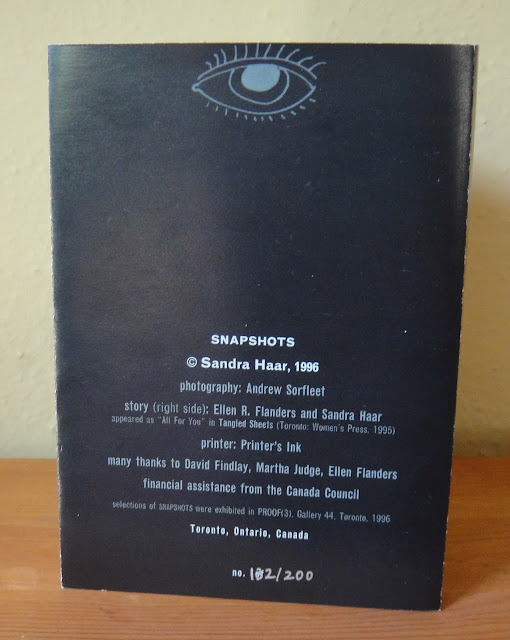 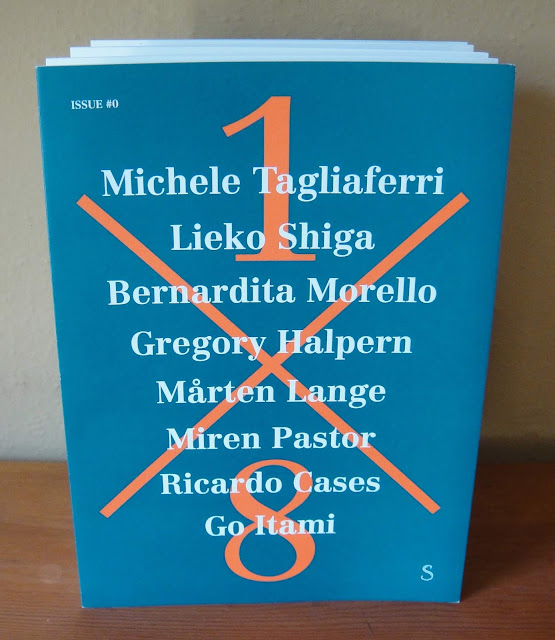 A smart accordion issue of this magazine that appears to have disappeared without a trace. Edited by Milo Montelli and Michele Tagliaferri and with texts by Leonardo Tagliaferri, this issue is taken up with showcasing the works of "...8 artists we love." A cool sequencing of 8 photographs and a text dedicated to life "...because in the end it is all that WE have left." 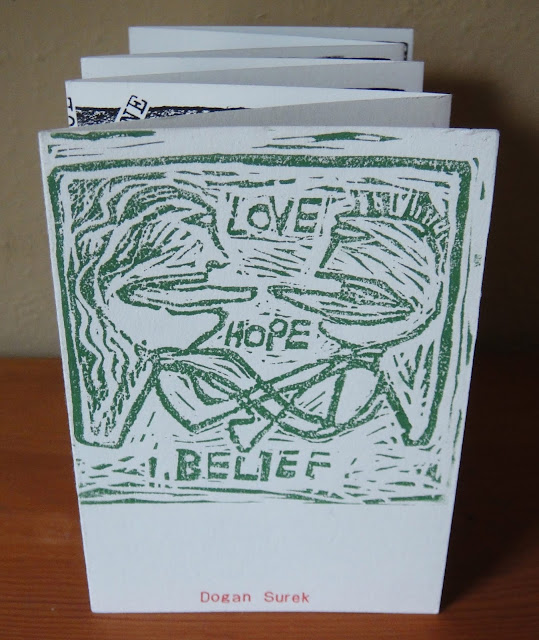 I only recently discovered this little beauty by Dogan Surek. With its mixture of hope and optimism, and then the dismal decline into something completely the opposite, this accordion charts it all in unsparing detail, even down to the hand-painted drips of blood!

I have a variety of Surek's other accordions on this site, and would claim that he is one of the few artists who has over the years consistently worked with the accordion format in really smart, interesting and creative ways. 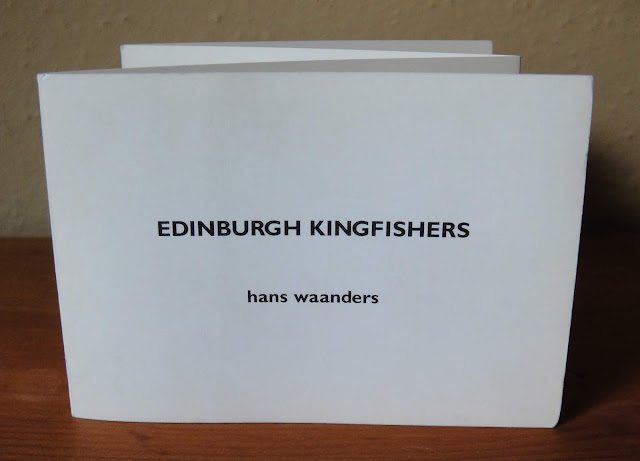 A curious little one-sided accordion by this artist from the Netherlands. I'll let this statement from the Johan Deumens gallery, Amsterdam, that represents his estate describe his life's work:

Hans Waanders (Netherlands) used and subverted scientific techniques: etymology, classification, archiving, comparison of specimens. Yet the obsessive, controlling impulse is the product of a sense of loss: a beautiful moment, remembered and sought after, opening out a lyrical narrative about memory and yearning.
Hans Waanders work is prefaced by a moment in real life, elevated to the status of a legend: On October the 4th 1982 Hans Waanders saw for the first time the kingfisher along the river Maas. From that moment collecting and working out information about this bird started. The tangible result of the longing to see the kingfisher again. This desire was played out during the years following, obsessively documenting the kingfisher. Like the best detective stories, Waanders allowed himself to become obsessed with the idea of getting under the skin of his prey. The more perfect his know-ledge, and the closer his identification, the closer he believed he could get. (quotation Fruitmarket Gallery, Edinburgh; For Once, Then, Something, 2001)
Upon his demise in 2001 Hans Waanders left behind an oeuvre of inestimable value. His estate is a universe on its own, an admirable and miraculous attempt to appropriate the kingfishers life. He published more than 200 books, many prints, countless stamps and multiples. It has been his wish to continue showing and offering his work to the world.
Johan Deumens
I have no idea who the author is of the open book of poetry on page 3, but there is a reference to a kingfisher in one of the verses.
4 pages, individual 3.25" x 4.5", when opened 18". 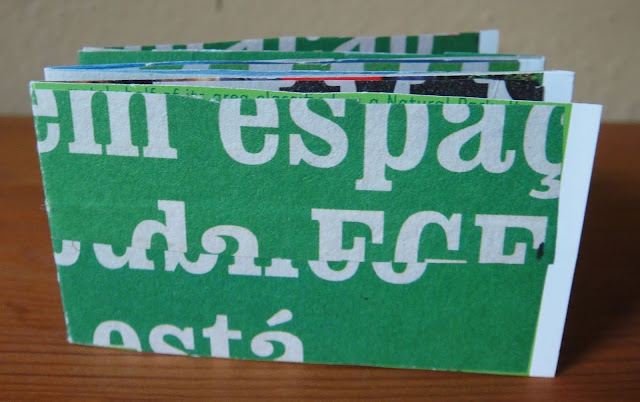 I just received this sweet little collage accordion from my longtime mate, Clifford Hunt. The secret to unlocking some of the 'texts' in this wonderful word game of a piece is that Clifford has just returned from a couple of glorious weeks in Portugal. Throw into the mix that Clifford has long been a wordist and player with texts and this work just seems to flow right from that source as well. I like the size and intimacy of it, as if you could carry it around all the time and use it as a talisman to ward off things you don't want to see or talk about....