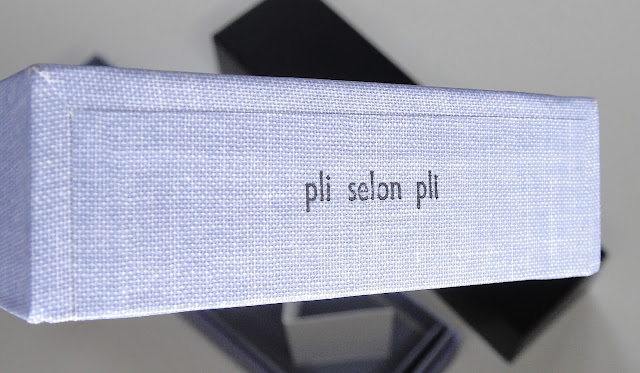 In October of last year I received an email from Simon Cutts (director with Erica Van Horn of Coracle Books) asking me if I was interested in a "wee concertina" of his, titled pli selon pli (fold upon fold), 2014. Naturally I was, and as Cutts later explained to me there are only 2 copies of this work, and the other was in The Beinecke Rare Book & Manuscript Library at Yale University.  He went on to describe the work writing "What to say of it, other than it's a plinth with a concertina... Of course the title is taken from Mallarme via Boulez, who isolated it somewhat with his composition of the same. But I tend to think of it more as a Brancusi archetype, the whole thing, and even more just the concertina/accordion form as the form of Brancusi on paper."
In our emails Cutts also addressed his own concerns about this piece, writing that "...it was a somewhat unresolved work," and further "...it's a suggested work rather than a completion, in that it doesn't necessarily achieve its full potential. An aspiration, not a fulfillment. You get like that sometimes."
The work duly arrived in the form of a light blue binder box with a wonderful block of ebony nestled inside, accompanied by a folded accordion slipped into a small gap at the title end of the box. Also, with the package was a bundle of extra accordions in case the one on display got soiled. 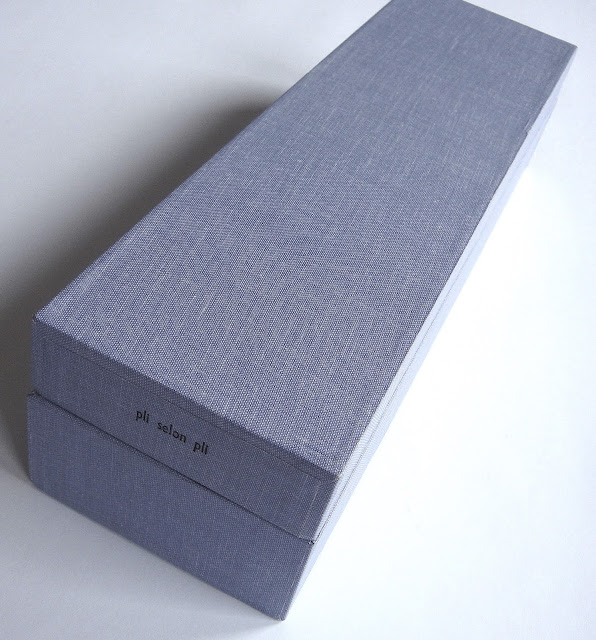 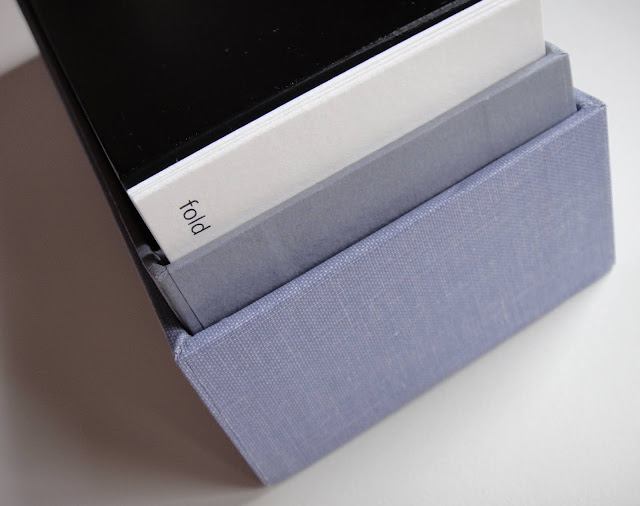 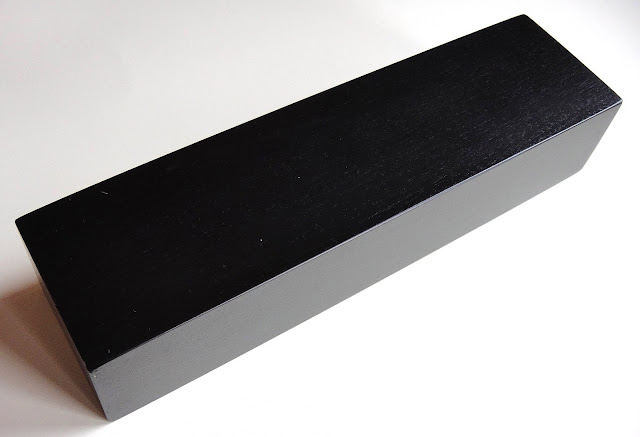 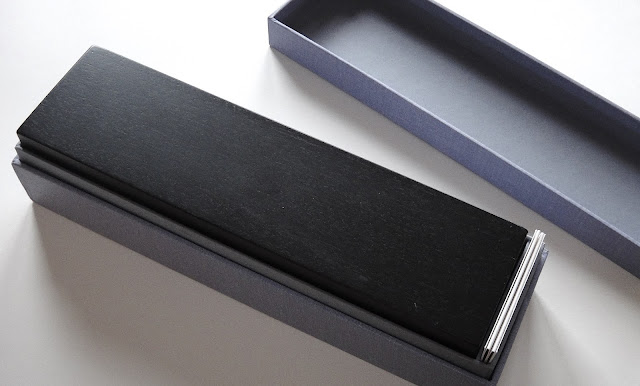 Pli selon pli is the title for a musical composition for soprano and orchestra written by the avant-garde composer Pierre Boulez (1925-2016), and first performed in 1960. The subtitle of the work "Portrait of Mallarme" reveals the work to be an homage, or tombeau, to this key French Symbolist poet who used the term pli selon pli in a poem describing the mists disappearing over the city of Bruges. Boulez himself uses the phrase in describing the momentum of the work, that "...fold by fold, as the five movements develop, a portrait of Mallarme is revealed." Boulez also incorporated significant sections of Mallarme's writings into the soprano's score.
Mallarme (1842-1898) is most famously known for penning the infamous text Un Coup de des jamais n'abolira le hasard (A Throw of the Dice will Never Abolish Chance) written in 1897 and published for the first time in 1914. This radical early modernist work has been a key influence on language experiments ever since, with the text of this 'score' floating unruly across its pages and its typography unleashed from previous constraints. This heady mix of free verse and experimental typography ushered in a whole new era in which words on the page functioned both as a literary sign and as a visual score, with this development proving seminal in laying the foundations of both visual and concrete poetry later in the century.

Pierre Boulez was equally radical within the field of contemporary music and pli selon pli confronted the listener with a startlingly new listening experience, similar to the reader when encountering Mallarme's work. Commentators responded enthusiastically stating that it was "a touchstone in postwar composition," with another writing that it was possibly Boulez's "greatest score." 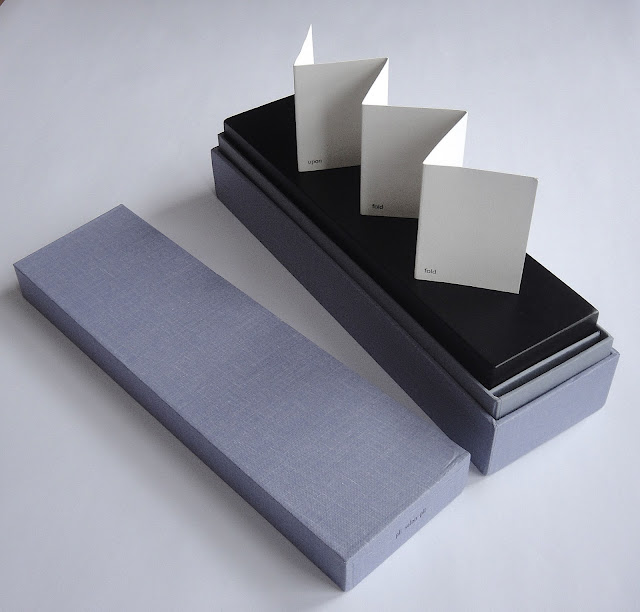 In Simon Cutts's quote at the beginning of this text he connects the repetitive and serial nature of the accordion with the sculptor Brancusi's Endless Column (vers. 1, 1918) which was constructed from repeatedly adding rhomboids atop each other, most famously illustrated in his monumental 98.5ft Endless Column at Targu Jiu, Romania. Looked at now from our historical vantage point this piece is clearly a breakthrough modernist work that combines purely abstracted shapes in a radical, and open-ended sculptural form that could be continued endlessly, to infinity. And, as Cutts suggests, every accordion with their similarly serial and repetitive structures, combined with their unique sculptural qualities, have the potential to become — endless accordions.
1 binder box 12" x 3.5" x 3," 1 block of mahogany 11.75" x 3" x 2.25," 1 accordion, 6 pages, double-sided, individual pages 3" x 2.5," when fully opened 15." 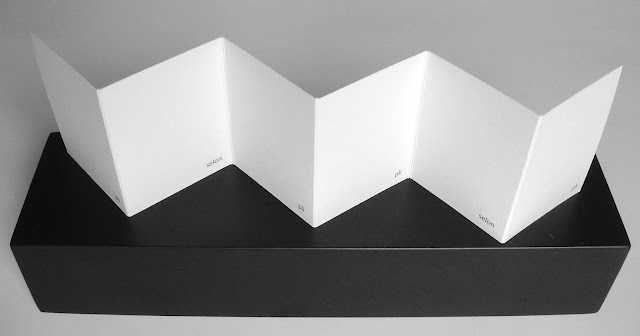 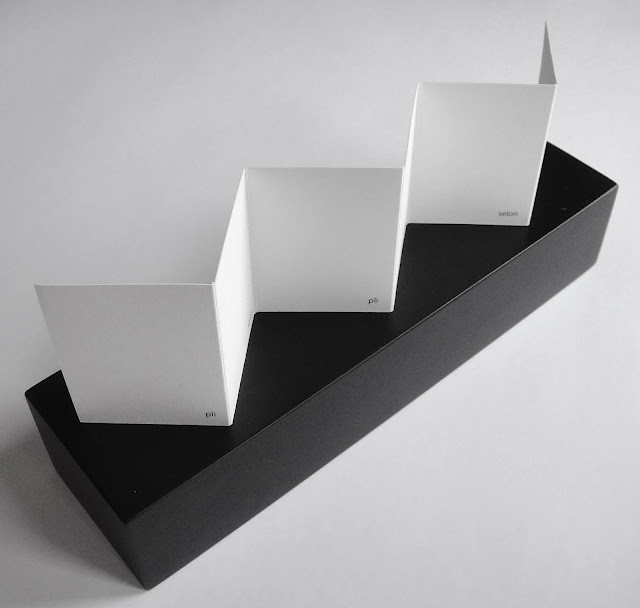 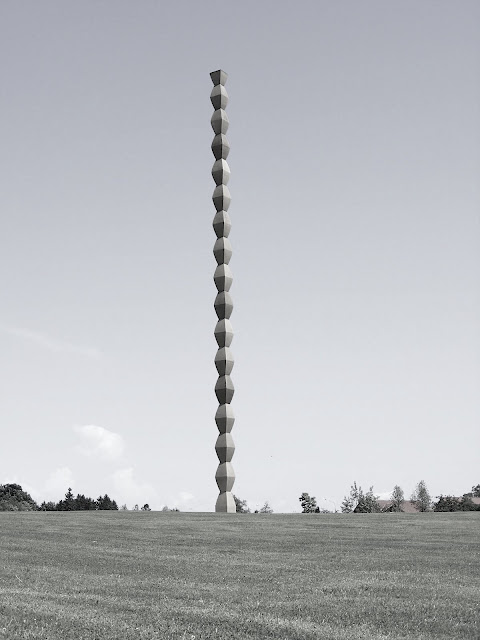