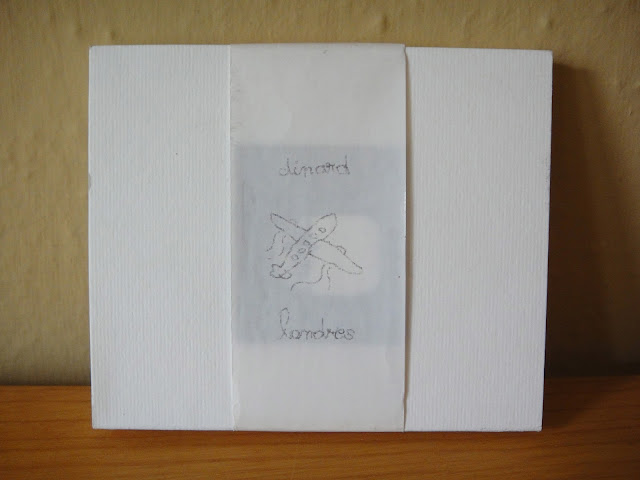 I'm going to let Valentin Orange explain what this fascinating little leporello is all about with its title referencing these two European cities. This statement is from October, 2017.


"About the book: What is printed on it are photos. You maybe can't really guess at first glance what is on the photos but that’s normal. They are taken in a plane with a GameBoy Camera, a lo-fi camera made by Nintendo for the GameBoy in 1998. It's not unusual to photograph the take-off of the plane or the clouds from the windows with a camera, but doing it with this kind of camera is really different. The result isn't descriptive, or let's say the informations are hidden behind a smog of pixels.

This particular camera was a center of interest to me and the start of this work (did several tests with it). You can also use it with a GameBoy Printer, another accessories made by Nintendo used to print pictures (mainly the pictures you took with your GB Camera) on a cheap thermal paper. Here were my concerns: you can't preserve well this kind of print and you can't really directly use it to make a book. Moreover, the camera is limited to 40 photos that you can’t transfer onto a computer, the print is the only way to "save" them, but as i said, it's not really made to resist the passing of time.

What i wanted to do with this book was finding a way to preserve the photos and also thinking about an easy way of viewing/reading them. I printed them with the GB Printer, scanned them, resized them a little, then looked for the right paper and laser printed it. I can't remember the name of the paper and i don't have the documentation about it with me now, i'm sorry, but i chose this one for some simple reasons: good quality, thick enough so you can be able to do a good leporello, and above all because for the texture which kind of copied the raster of the GB screen.

I chose the Leporello format for several reasons: i find it easer to manipulate than a regular booklet format given the size of the book; you can read it frame by frame or in the whole length-wise, doing so you can see the photos in chronological order (from the take off of the plane to the landing) and compare one to another, doing so it can help to understand what this series of photos is about; the book unfold is also a continuity of the original pictures printed with the GB Printer: this printer prints on rolls of paper, the leporello format is closer to the roll than a booklet format, it's still one piece of paper; finally i did a recto/verso print because you can read it from A to Z or from Z to A, you can see the take off of the plane as a landing and vice-versa.

Last thing: the little sheath used to hold the book closed was printed using the GB printer and some thermal paper. The drawing of the plane and the title of the book (the two cities related to the flight) were drawn with the GameBoy (the GameBoy Camera allows you to draw on your photos, photographing a bright white background allows you to draw on a "white paper"). This can get erased by time, it's not that much of a big deal, the more important to my eyes are the photos." 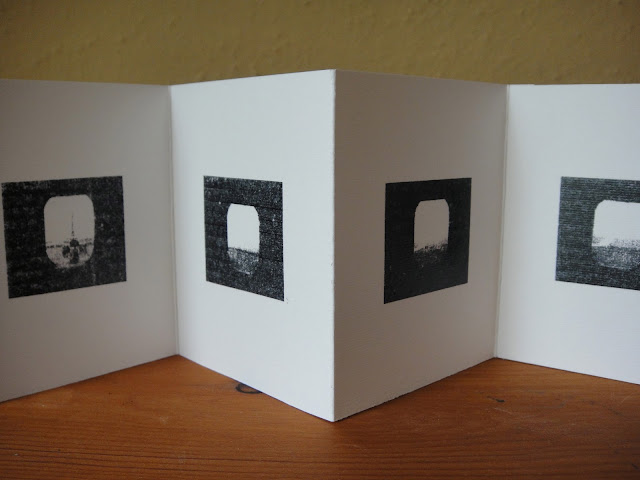 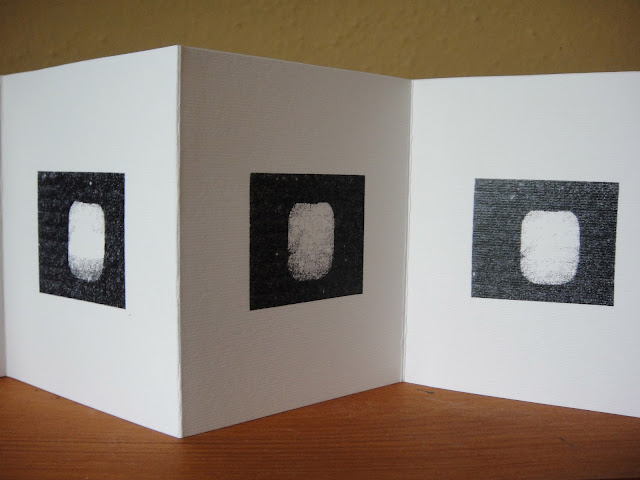