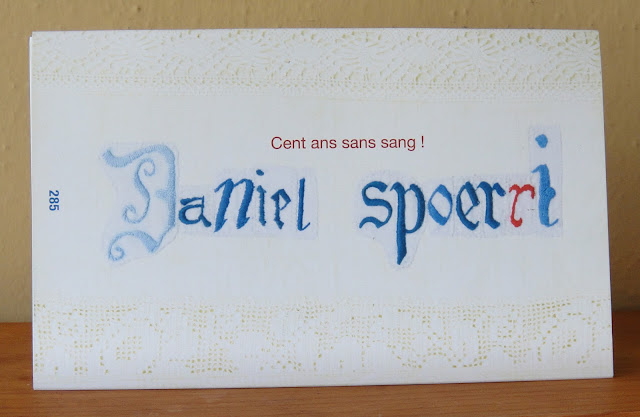 This is a fascinating accordion by this longtime Swiss avantgardist (b. 1930) who is perhaps best known for his "snare-pictures," which consist of table tops with the remnants of meals glued onto them, and hung vertically on a wall.
Invited to do the 100th issue in a series of artists' publications that Editions Jannink has been publishing since 1978, Spoerri came up with "Cent ans sans sang!".  In the opening pages of the 'book' part of this publication, Spoerri recounts how he'd refused three requests to do this issue, but then "someone pointed out to me the double meaning of 100/cent and sans/sens and explained to me that Max Ernst would have referred to the fact that in their erotic fantasies, men never imagine faces but always bodies and sexes." Spoerri is referring here to a book of collages that Max Ernst published in 1929 titled "La Femme 100 têtes," (The Hundred Headless Women) of which he had seen the originals, and had clearly been impressed.
In the publisher's introduction to this accordion they state that Spoerri "...plays on the homonyms of the word "cent" (100), a kind of tribute to "La Femme 100 têtes," by Max Ernst. Using the multiple meanings given to a unique sound, would Spoerri compose, in one sentence, a true pacifist commitment?".
This is where this publication becomes problematic for me - it's in the "homonyms" part of it!  A homonym is "each of two or more words having the same spelling or pronunciation but different meanings and origins."  ie. lead (the metal) and lead (as in the verb), or there and their.
Since French is not my first language, although I studied it long enough in school, I'm not getting the subtleties of the wordplay here!  However, google translate did seem to do a good job of the wordplay that runs down the whole length of the work reading: "the leech who smells of the incense of a hundred years of meaningless spilled blood!". Nothing subtle about that!!
16 single-sided pages, each 4.5" x 8" and when fully open 6 feet. 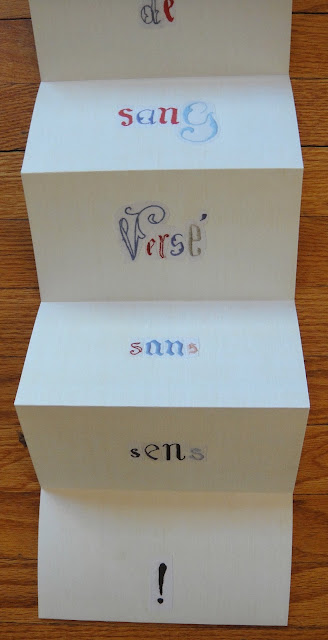 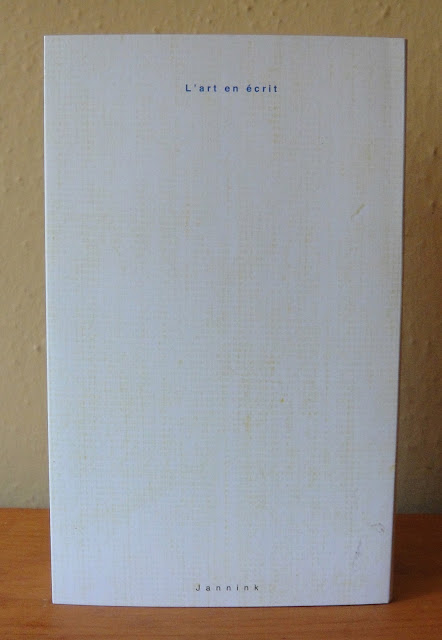