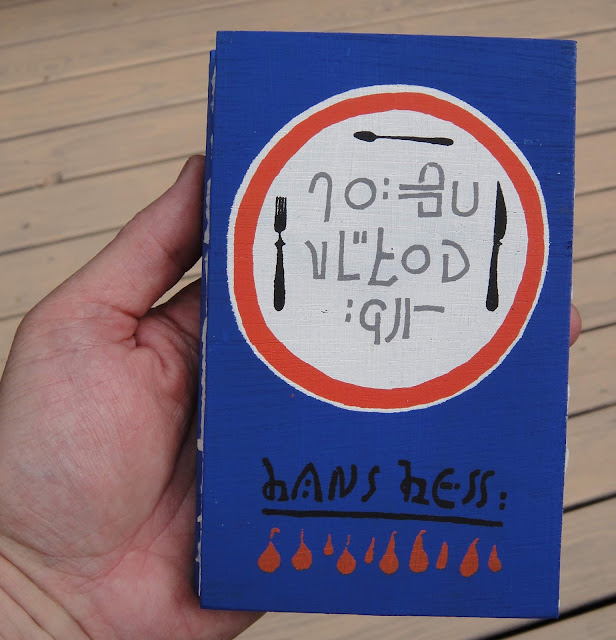 Another beautiful double-sided silkscreened accordion from the Redfox Press' 'Blue Fox (accordion) Collection.' This is a wonderfully idiosyncratic cook book that leaves everything to the reader's imagination. The text is of no help since it's a totally abstracted language. About the artist, Hans Hess, I'm copying here his entry in the 'Mail Artists Index,' a project initiated by Birger Jesch and Lutz Wohlrab (Mail Artists Index):

Hans Heß was born in Annaberg-Buchholz in 1951. After an apprenticeship as steel-relief engraver he attended evening courses at the College of Fine Arts in Dresden, branch Oederan, from 1973 to 1976. Subsequently, he studied metal design at the School of Industrial Design Burg Giebichenstein in Halle until 1981. Since 1982 he has been living in Schwarzenberg in Erzgebirge.


Since the late 1970s he has been active in the Mail Art movement, of which he had heard from the essay on Robert Rehfeldt written by Joachim Walther. Curios after reading about him, he wrote to Rehfeldt and thereby gained access to the network. He initiated a number of projects, the first one in 1990.

From 1991 to 1994 he was trained as an occupational therapist and has since worked in this profession.